CVR: Number Of Registrants Increases To 752,011 In Three Weeks 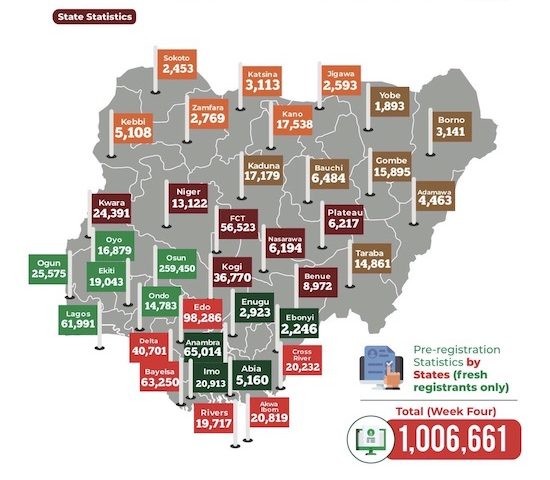 Barely four weeks after the Independent National Electoral Commission (INEC) opened its portal for the online pre-registration of voters on 28th June 2021, over one million voters have now registered. The Commission made the disclosure in a statement issued today and signed by National Commissioner and Chairman, Information and Voter Education Committee (IVEC), Barrister Festus Okoye.

The revelation coincides with the physical registration aspect of the ongoing Continuous Voter Registration (CVR), which begins today in all INEC State and local government offices nationwide.

In specific terms, Okoye revealed that as of 7am today, Monday 26th July 2021, the number of new registrants had risen to 1,006,661. He said figures obtained from the distribution of registrants indicated that a higher percentage of those that have so far applied were youths aged between 18 and 34, which accounts for 73.5 per cent of the total applications received.

He said: “The detailed distribution of the registrants by age, State/FCT, gender, occupation and disability for Week Four of the exercise has been uploaded to the Commission’s website and social media platforms. However, the distribution by age still shows that 740,063 (or 73.5%) are young Nigerians between 18 and 34”.

Also uploaded to the INEC Website for ease of access to citizens,  according to the IVEC Chairman, are the exact locations of the designated centres where citizens can walk into for physical registration.

His words: “as earlier announced by the Commission, physical or in-person registration begins today, Monday 26th July 2021 at our 811 State and Local Government Area offices nationwide. The exact locations of the designated centres have already been uploaded to our website and social media platforms. For further details, citizens are encouraged to contact our State offices through the dedicated telephone numbers provided in the uploaded publication”.

Okoye also said Nigerians who pre-registered online can now complete their registration at the designated centres based on scheduled appointments. At the same time, Nigerians who prefer to register physically can do so at the same centres.

The IVEC Chairman affirmed that both the online pre-registration and physical registration would continue simultaneously until the suspension of the CVR on 30th June 2022 to enable the Commission to clean up the data and compile the voters’ register for the 2023 General Election.

He appealed to already registered citizens not to register afresh as this would amount to double registration which is against the law. He warned: “Once again, we wish to remind citizens that the ongoing registration does not include those already registered as voters. The current exercise is only open to Nigerians who are 18 years and above who have not registered before.  It is an offence under the Electoral Act for any citizen to register more than once”.