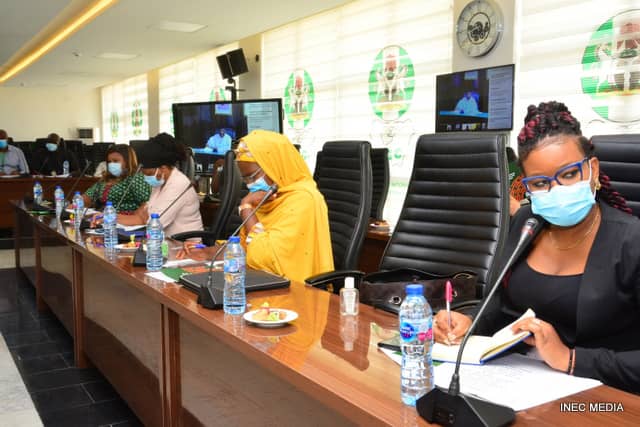 Chairman of the Independent National Electoral Commission (INEC), Prof. Mahmood Yakubu, has harped on the need to expand voter access to polling units. He identified the expansion exercise as a panacea to voter apathy in the country.

The INEC Chairman made the submission during a consultative meeting with members of the Civil Society Community held today at the INEC headquarters, Abuja as part of the Commission’s on-going consultations with stakeholders on the expansion of voter access to polling units in the county. Over 50 participants joined the meeting virtually.

Speaking at the meeting, Prof. Yakubu said “as accredited election observers, CSOs have submitted reports to the Commission. Having studied these reports in detail, it is clear that you are concerned about the declining voter turnout in elections in Nigeria. Over the last two electoral cycles, including off-season elections, voter turnout across the country hovers around 30-35%”.

He added: “While a few elections had higher percentages, some recent bye-elections recorded as low as 8.3% voter turnout in an urban constituency of over 1.2 million registered voters located in the nation’s most densely populated city. This unfavorably compares to the average voter turnout of 65-70% in other countries, even in the West Africa region. Justifiably, CSOs have been urging the Commission to find a solution to this problem”.

While making a strong case for the need for an expansion of Polling Units to allow for ease of voter access, Prof. Yakubu identified other factors that contribute to voter apathy. He said: “The Commission has deeply reflected on the matter. Our conclusion is that several factors are responsible for discouraging voter turnout,among them inadequate voter and civic education, ineffective voter mobilisation, the fear of violence during elections, unfulfilled promises by elected officials and low public trust in state institutions”.

He continued: “while the Commission will continue to work with CSOs and all stakeholders to address these challenges, we are also convinced that access to polling units is a critical factor in voter turnout during elections. Countries with higher percentages of voter turnout during elections also have adequate and convenient voting locations for eligible voters which are periodically adjusted to reflect increase in voter population”.

The INEC Chairman narrated the sad tale of the Nigerian experience and previous unsuccessful efforts at expanding voter access to polling units. His words “The country currently has 119,973 polling units established in 1996 by the defunct National Electoral Commission of Nigeria (NECON) to serve a projected population of 50 million voters. The figure remains the same for the last 25 years although the number of registered voters has increased to 84,004,084 by 2019 and is set to rise after we resume the registration of new voters ahead of the 2023 General Election.

“The Commission has reviewed the previous efforts at expanding voter access to polling units in 2007, 2014 and just before the 2019 General Election and why they were unsuccessful. We came to the conclusion that our genuine intention may not have been properly communicated for input by Nigerians and therefore misunderstood and politicised”.

Prof. Yakubu explained that the Commission had learnt from the previous futile efforts aimed at expanding voter access to polling units and had dedicated quality time, manpower and resources towards ensuring that it gets stakeholder buy-in on the proposed expansion, and provide detailed materials for public enlightenment and education.

He said “Learning from experience, the Commission has now decided to start early and to engage with Nigerians by consulting widely. We have worked hard in the last two months and produced a Discussion Paper entitled The State of Voter Access to Polling Units in Nigeria.

“We have also prepared satellite imageries of the location of polling units across the country and produced still pictures and videos to demonstrate the difficulties faced by voters on Election Day. The hard copies of the Discussion Paper are being widely shared while the soft copy, including links to the videos, has been uploaded on the Commission’s website and social media platforms”.

He added that “we hope that by doing so, we will better communicate the Commission’s intention to Nigerians and invite input across the board on how to address this problem in the immediate term and hopefully establish the framework for future adjustments as the need arises, as is the case in virtually all democracies around the world. I am confident that by working together, we will make history by finally solving this 25-year-old problem of expanding voter access to polling units in Nigeria”.

Responding on behalf of the CSOs, Dr. Idayat Hassan, of the Centre for Democracy and Development (CDD), commended the Commission for its cooperation with the CSO community under the leadership of Prof.Yakubu. She affirmed that the CSOs will continue to engage with INEC constructively and will remain the Commission’s partners in progress.