INEC Chairman, Prof. Mahmood Yakubu who unveiled the two documents at the Commission’s headquarters in Abuja, explained that the 13-Chapter Report “examines in detail the key activities, preparations and challenges associated with the conduct of the 2019 General Election, ranging from registration of new political parties, conduct of continuous voter registration, monitoring of party primaries, candidate nomination process and party campaigns, the recruitment and training of ad-hoc staff and the accreditation of election observers and party agents”.

Other areas covered by the General Election Report, according to him, include the vision, mission, opportunities and challenges of the Commission upon its inauguration on 9th November 2015; lessons learnt from the conduct of over 170 off-cycle governorship elections and bye-elections, the review of the 2012-2016 Strategic Plan (SP) and Strategic Programme of Action (SPA); the 2015 Election Project Plan (EPP) and the design, formulation and implementation of the 2017-2021 Strategic Plan, Strategic Programme of Action and the 2019 Election Project Plan” .

Prof. Yakubu said the report also discussed the processes and procedures for the conduct of the General Election, including the deployment of personnel and materials, the operation of the Situation Room and Collation Centres and the organisation and management of the Counting, Collation and Declaration of results at National, State, LGA and Registration Area levels.

He continued: “It also deals with pre-election and post-election litigations. The last section of the report focuses on the preparation and delivery of the election in the 36 States of the Federation and the FCT. The concluding part of the report dwells on the critical issues and challenges associated with the preparation and conduct of the election, lessons learnt and specific recommendations for addressing them”.

Speaking on the Review Report, the INEC Chairman said “it covers the outcome of internal debriefing meetings and external engagements with electoral stakeholders held from 28th May to 12th July 2019. The aim was to evaluate the Commission’s actions, processes and procedures before, during and after the election.

“While the internal review involved the Commission’s debriefing sessions with its Electoral Officers, Administrative Secretaries, Directing Staff and Resident Electoral Commissioners to critically appraise its performance in the conduct of the election, the engagement with external stakeholders involved meetings with leaders of political parties, members of the Inter-Agency Consultative Committee on Election Security (ICCES), Civil Society Organisations and the Media. Consisting of a total of 12 engagements in six separate internal and external meetings, the review exercise enabled the Commission to listen to its officials, receive feedback from relevant stakeholders and learn vital lessons in the continuing effort to improve the conduct of elections in Nigeria” .

He added: “Presented in 16 Chapters, the Report identifies the main issues discussed in the review exercise and provides detailed assessment on the opportunities and challenges associated with each of the issues as well as actionable proposals for resolving them. Although the Commission has undertaken such a review in the past, this is the first time that the report is published and disseminated with the public. It contains 180 recommendations that either require administrative action by the Commission or amendments to strengthen the existing electoral legal framework by the National Assembly”.

Prof. Yakubu explained that in a proactive move, some of the recommendations that require administrative action by INEC were already being implemented, resulting in improved management of the electoral process as seen in the recent off-cycle Governorship elections in Edo and Ondo States.The Commission, he explained, was similarly engaging with the National Assembly on aspects of the recommendations that require legislative action.

He seized the opportunity to appreciate the immense contributions of stakeholders and development partners to the deepening of democratic process in Nigeria. His words: “the activities and engagements leading to the publication of the two reports would not have been possible without the full participation and continuous support of political parties, civil society organisations, the media and security agencies. I wish to reassure you that such strategic engagement will be sustained. The Commission will also continue to work with all our partners to encourage inclusivity for marginalized groups such as Persons with Disability (PWDs), youths and women in the electoral process.

“The Commission similarly appreciates the partnership of the European Centre for Electoral Support (ECES) and the International Foundation for Electoral Systems (IFES) for supporting the review of the 2019 General Election as well as the printing of the reports. The two organisations, along with Friedrich-Ebert-Stiftung (FES) have also supported the Commission in other ways, including the printing of the Commission’s Policy on Conducting Elections in the Context of the COVID-19 Pandemic (2020),  Voter Code of Conduct (2020) and Code of Conduct and Rules of Engagement for Security Personnel on Electoral Duty (2020) all of which have already been publicly disseminated”.

The INEC Chairman expressed the hope that the two documents would make useful contributions in helping the public understand the issues and challenges associated with the 2019 general election and also serve as resource materials for research.

In his welcome address, the Chairman of the Commission’s Operations and Electoral Logisitics Committee, Professor Okechukwu Ibeanu said the 500 pages of documentation being presented were a careful attempt to chronicle the last three years of careful work on the part of the Commission.

Prof. Ibeanu said in the process of carrying out its functions and putting together the reports, the Commission was guided by a number of principles. “The first one is the principle of openness that is driven by genuine consultation, he said. “Secondly, the Commission has always based its work throughout this process on sound knowledge which is informed by good signs. Finally, the Commission has placed a lot of emphasis on collaborations based on genuine partnerships. This is a huge collaborative effort. That is why IFES and ECES are here represented here”. 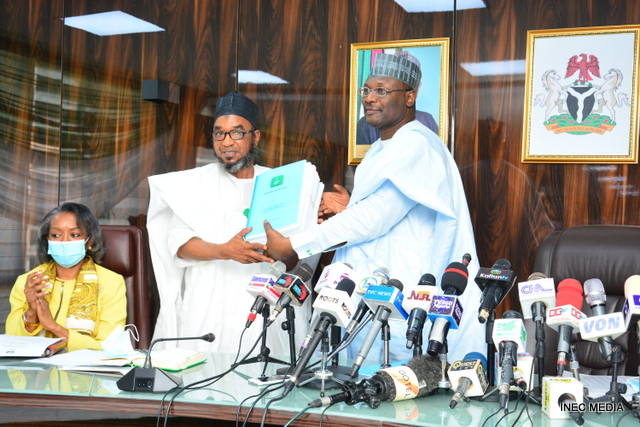