The Independent National Electoral Commission (INEC) yesterday welcomed three new National Commissioners into its fold, moments after they were sworn-in by President Mohammadu Buhari at the Presidential Villa. At the same time, the INEC Chairman, Prof. Mahmood Yakubu, administered the oath of office on a new Resident Electoral Commissioner (REC) at the Commission’s headquarters in Abuja.

Saidu Babura Ahmed, a Professor of English Literature from Bayero University, Kano (BUK), is the new REC. He fills the vacancy for Jigawa State, the only State without a REC, following the completion of tenure of Mr. Abdullahi Kaugama, an experienced Administrator who also served as Secretary to the Commission. Shortly after taking his oath, the INEC Chairman announced his deployment to Zamfara State.

At the brief ceremony their friends and family members attended, the INEC Chairman said the four appointees would bring their vast knowledge and experience as scholars and administrators to the Commission and further extend the frontiers of free and fair elections in Nigeria.

He said: “In addition to adherence to the provisions of the law, our success in this arduous task draws largely from our credibility as election managers. We must be strict in applying the law, firm in handling the public trust bestowed on us and fair in our dealings with political parties and candidates. We must remember that Nigeria and Nigerians always come first. We must abide by our oaths of office to defend the choice made by Nigerians in all elections. We must continue to work hard to protect the sanctity of the vote without which democratic election is meaningless.”

Shifting to the tasks ahead, the INEC Chairman noted that the new appointees were coming on board with the Anambra Governorship election only 52 days away. He said the election to choose a Governor for the State would hold on Saturday 6th November 2021. His words: “all the 18 registered political parties are fielding candidates, and campaign has since commenced. Preparations for the election are at an advanced stage, with many of the activities outlined in the Timetable and Schedule of Activities for the election already implemented. We intend to keep deepening the credibility of the electoral process by improving on all planning, management, implementation and support processes through the deployment of appropriate technology.”

Responding on behalf of the new appointees, Prof. Abdulahi Zuru commended President Muhammadu Buhari and the leadership of the National Assembly for counting them worthy of what he described as “a critical national assignment.” 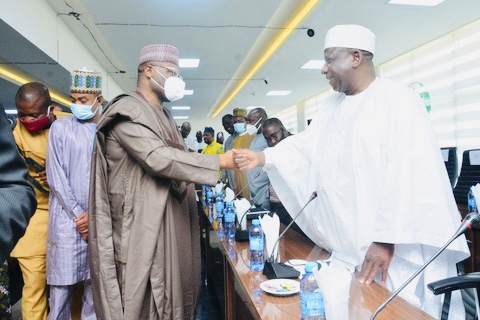