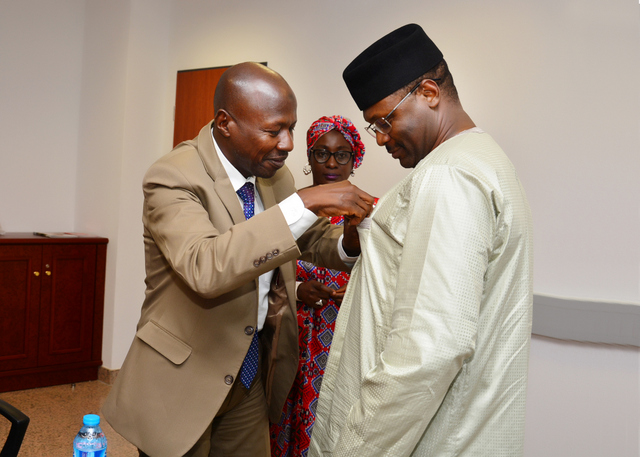 Vote buyers and their potential customers run the risk of being arrested and prosecuted if they attempt to ply their trade at the Osun state governorship election holding on Saturday, September 22.

The decision was the outcome of a meeting between the Independent National Electoral Commission (INEC) and the Economic and Financial Crimes Commission (EFCC) at the latter’s new headquarters in Abuja on 20th September.

Prof. Yakubu, who led a team of National Commissioners to the meeting, affirmed that INEC was worried about the vote buying and selling phenomenon and had already taken a number of steps to address the menace.

He explained that while the incidence of ballot box snatching and kidnapping of INEC officials had reduced significantly due to a number of strong reforms INEC had put in place to strengthen the electoral process, the vote buying and selling phenomenon was posing another worrisome challenge.

Prof. Yakubu said: “We are here as part of our consultations with critical agencies that are connected to the electoral process. We have undertaken a number of innovations to strengthen the electoral system and these days, you hear less of ballot box snatching and kidnapping of INEC officials. But as we solve one problem, another one is coming up.”

He continued: “Of immediate concern is the election we are holding on Saturday (September 22) in Osun State and it is going to be the last major election before the 2019 general elections. We have taken steps as a Commission, but we need the support of the EFCC in this respect. Vote buying and selling is earning a bad reputation for our democracy, for our elections and we thought we should visit national institutions like the EFCC because you have the powers under the law to arrest, to investigate, to prosecute and to help us, so we can stem this ugly tide of vote buying and selling.”

The INEC Chairman regretted that the Commission had also recently observed increasing inducement through electronic transfers, whereby money is transferred into the accounts of some voters in order to influence their decisions on Election Day. “We believe that you have both the law and the capacity on your side to help us in this respect”, he said.

Professor Yakubu maintained that only the votes of the people should determine who wins or loses in an election and not through open inducement using cash at polling units.”

He implored the EFCC to also monitor campaign finances of political parties and their candidates. His words: “as we go into the elections proper in 2019, we also need your support in the area of campaign finance and spending by candidates. The law has prescribed limits as to what candidates can spend in elections but we need the enforcement of these laws. We don’t want the money-bags to determine our democracy. We want the votes of the people to determine who wins in our elections”.

Mr. Magu, who shared the INEC’s Chairman’s worries, said: “There’s indeed a lot of concern about vote buying and selling. There’s also a lot of concern about the possibility of moneybags trying to derail our democracy and democratic process. We have the mandate to monitor money transfers and we are collaborating with the banks. We have the mandate to arrest, investigate and prosecute and we are going to use the (Osun governorship election) as a test case.”

Magu also assured the INEC Chairman: “We will work with you. We will do our best.”

However, the anti-corruption organization’s boss also appealed to Nigerians to support the EFCC in the fight against corruption. ‘One way to fight corruption is to stop vote buying and stop voter inducement in elections so that democracy can survive,” he said.

Mr Magu (left), presents Prof. Yakubu with a plaque after the meeting.